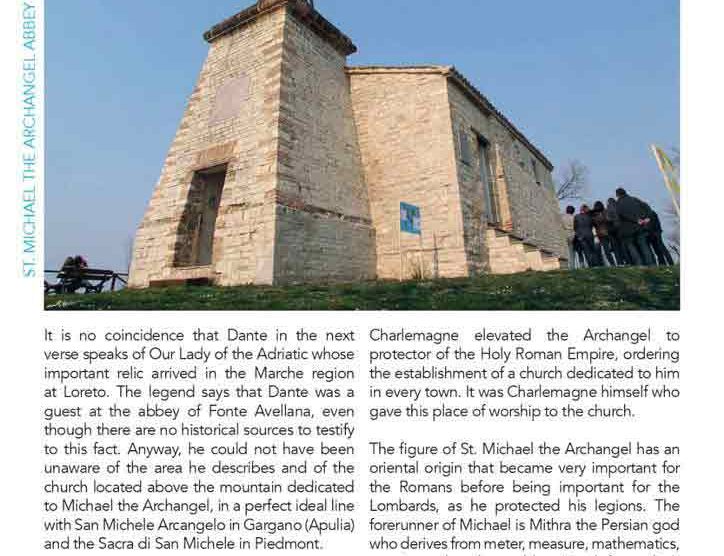 In the Canto XXI of Paradise, 106-111, Dante Alighieri the supreme Italian poet, through the mouth of Pier Damiani describes the area located between the two coasts, Tyrrhenian and Adriatic in the middle of the Tuscan-Emilian Apennines, not far from Florence, “where there are mountains so high that the thunder falls much lower.”

There is the top of Monte Catria, where below is consecrated a hermitage, the one of Fonte Avellana, which is usually reserved to God. Dante points out that the whole area of the mountains of central Italy was once mystical and holy and many people ascended to heaven from there. One of these mountains is the one of Monte dell’Angelo that overlooks Arcevia, in the province of Ancona, in the Marche region.

The entire area has always been viewer and protagonist of holiness and wisdom that Dante surely knew very well. Let’s think of the scriptorium di Fonte Avellana that, similarly to Castel del Monte in Apulia or to Santa Maria di Collemaggio in L’Aquila, very linked to the figure of Celestine V, was built according to the golden number of divine proportions, a science for the chosen few.

It is no coincidence that Dante in the next verse speaks of Our Lady of the Adriatic whose important relic arrived in the Marche region at Loreto. The legend says that Dante was a guest at the abbey of Fonte Avellana, even though there are no historical sources to testify to this fact. Anyway, he could not have been unaware of the area he describes and of the church located above the mountain dedicated to Michael the Archangel, in a perfect ideal line with San Michele Arcangelo in Gargano (Apulia) and the Sacra di San Michele in Piedmont.

We are talking about Monte dell’Angelo, once Monte Camiliano, which stands out and looks at Arcevia. This mountain was in the past considered sacred. A ritual mountain for pagans, Lombards, Byzantines and Carolingians who chose Michael the Archangel as their protector. Charlemagne elevated the Archangel to protector of the Holy Roman Empire, ordering the establishment of a church dedicated to him in every town. It was Charlemagne himself who gave this place of worship to the church.

The figure of St. Michael the Archangel has an oriental origin that became very important for the Romans before being important for the Lombards, as he protected his legions. The forerunner of Michael is Mithra the Persian god who derives from meter, measure, mathematics, matrix, mother, the goddess Maath from which derives Ekate in Greek, but the forerunner of the Archangel Michael from Italy was called Angerona or Anghelosa which in turn derives from Anghelus. So we have the eastern Mithra and the Italic Angerona, an ancient goddess already in Roman times.

In Pavia, Lombardy, in the famous Romanesque Basilica dedicated to him, the figure of St. Michael is connected to the sacredness of the kingdom, the sacred investiture of political power (all the Lombard kings, including Frederick Barbarossa, were invested in this temple), the cult of the dead and the passing of souls. In the heart of his famous labyrinth is represented Minos in the act of killing the Minotaur, characteristic of the god Mithra precisely. The Archangel Michael therefore had a double function: that of psychopomp (in mythology and religion, a figure who performs the function of accompanying the souls of the dead in the afterlife) in the double door of hell and the blessed.

This passage took place in ancient mythology under the double sign of the rising of the Pleiades, which corresponds to the period between the two feasts dedicated to St. Michael, forerunners of the two Summer and Winter Solstices. St. Michael is therefore the Archangel with the scales, the fire and the sword. In ancient times he did not have a sword but a magic wand and he had a feather on his head, in fact the Archangel – whose name means “He who is God”, as El of Mikael is referred to a feminine element – does not kill the dragon but keeps in balance the micro and macro cosmos and for this he represents the celestial and earthly Justice.

For these characteristics it is natural that the Archangel has become in Italy the protector of the police force. 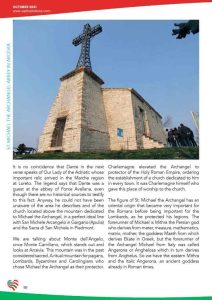 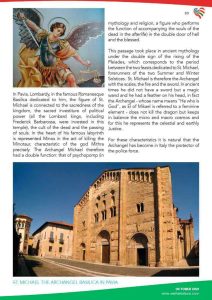